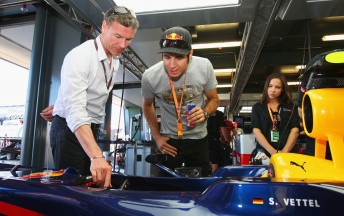 David Coulthard wants to race a V8 Supercar and is keen on a start at the category’s Great Race – the Supercheap Auto Bathurst 1000.

The 13-time Grand Prix winner, who is close to signing a deal to drive a Mercedes in this year’s DTM title, told the Carsguide that he’s been approached by two V8 Supercars teams to compete at Mount Panorama.

“Bathurst is a legend of a race, so I would love to drive there,” Coulthard said at the Bahrain Grand Prix.

“It would be nice, before I am too old, to do that. I have raced at Le Mans once and that’s another one to do.

“I’ve watched them on the telly. They are good meaty cars, and good drivers too. I would do it if I had the time.”

Coulthard admitted that the two teams he has spoken to were Kelly Racing and Paul Morris Motorsport.

“One of them was associated with Red Bull, the other with the Castrol team. That came via Mick Doohan,” he says.

Coulthard currently works on the BBC’s Formula 1 telecasts, as well an ambassodor for his former Grand Prix team Red Bull.