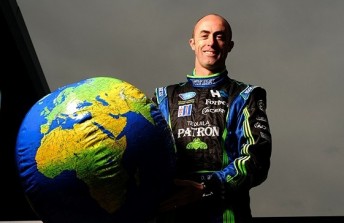 David Brabham is ready to take on the world in 2010

David Brabham says he feels ‘fresh and ready to go’ ahead of the opening round of the 2010 American Le Mans Series this weekend at Sebring.

The Australian is attempting to join brothers Geoff and Gary as an outright winner of the Sebring 12 Hour, as well as begin the defence of his ALMS crown.

Brabham’s Highcroft Racing team will field an LMP2 class Acura this season (branded as a ‘Honda Performance Development ARX-01c’), after competing in LMP1 during 2009.

The switch comes at a time when the ALMS have introduced a parity system to equalise the speed of the two classes.

“I think we are stronger than ever,” says Brabham, who’ll be partnered by Simon Pagenaud and Marino Franchitti during the race.

“It’s great to have Simon and Marino on board as we are already good friends and our working chemistry sparked straight away. They are very fast and their commitment, youth and enthusiasm will bring a different vibe and energy to the team.

“It will be interesting to see how the rules are in terms of making the LMP1 and P2 cars similar in speed, as I think there will be some tinkering to get that right.”

The task of an outright victory has been made easier with the absence of Audi, who have won nine out of the last 10 Sebring 12 Hours.

Even so, the P1 opposition remains formidable, with two Peugeot Sport 908 HDI’s and an Aston Martin Racing Lola amongst the field.

But Brabham refuses to rate his chances against the European teams.

“Getting to the finish as strongly as we can is our number one focus. We can’t really worry about anyone else,” he says.

“With a new car and new team-mates who will be pushing each other all the time, I’m very much looking forward to getting out there after the winter break. I feel fresh, I feel ready to go.”

Besides his ALMS program this year, Brabham will head to Australia later this year to compete in the international-flavoured Gold Coast SuperCarnivale for V8 Supercars on the streets of Surfers Paradise.

Check out the Highcroft team video, with Brabham giving you a detailed inside view of the Sebring circuit.