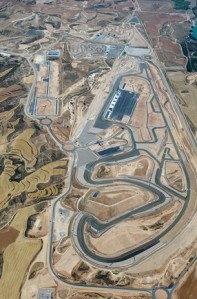 The Motorland Aragon circuit in Spain

The MotoGP event at Hungary has been cancelled and will be replaced with another event in Spain.

The September race will run at the Motorland Aragon circuit, which was announced at the start of the season as a reserve venue.

The Hungarian race will not go ahead due to construction work that is taking place at the Balatonring circuit.

The Motorland Aragon Grand Prix round will be held on September 19.

Official pre-season testing for MotoGP has continued, with Valentino Rossi topping the times at Losail ahead of Australian Casey Stoner.