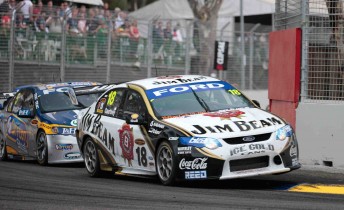 V8 Supercars chief steward Steve Chopping is developing a new penalty structure for the V8 Championship Series to help drivers, teams and the public understand the severity of penalties dished out.

Chopping is working on a five-tiered scale to label offences, which would be cover ‘minor,’ ‘moderate,’ ‘major,’ ‘severe’ and ‘extreme’ breaches. Each level of penalty would hold its own separate points penalty.

He told Speedcafe.com.au that he is currently formulating his proposal which will be delivered to V8 Supercars Australia for its assessment.

“What I will suggest to V8 Supercars is that we develop the concept, grading the offences and having a more fixed scale of penalities so that everybody knows where they stand in terms of misconduct,” Chopping said.

“The scale of penalites will be outlined from minor to extreme. It’s a concept that I’ve been exercising for some time with a view to having the public understand more readily the penalties that are imposed and explain the difference of a minor infringement which attracts a lower number of points, and higher ones which might attract more points.”

The concept is similar to football codes, which grade their on-field changes. Each grade attracts different penalites.

“(AFL and Rugby League) have taken some time to refine their codes, and obviously this would take time as well, but I think it’s something that is worth developing on the basis that the penalties become more transparent. The explanation for some of the difference in the penalties will be more apparent.

“I’ll make the recommendation to V8 Supercars that they should embark on it and endorse the concept and we’ll develop it from there.”

“The one thing that we need in the rules is consistency, and if it a system like this makes it easier and consistent to apply, then it could be a good thing,” he said.

“As long as it’s used the right way, it would be good.

“It’s tough for the officials. They have to judge each case individually, and no two cases are the same. Everyone feels hard done by when they’re on the bad end of decisions, so you’re never going to keep everyone happy 100 percent of the time.

“I suppose it could just minimise that chance and risk of wrong calls. If the new system that they’re talking about can be used correctly, it sounds like a good thing.”