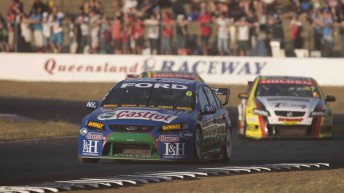 V8 Supercars Australia has elected to use the Queensland Raceway round of the Championship Series as its second full Sprint tyre round this year.

This news means that the two Sprint tyre-only rounds will run back-to-back at Queensland (April 30-May 2) and Winton Motor Raceway (May 14-16). Coincidently, the two circuits are the official test circuits for all V8 teams.

The Sprint tyre round was originally meant to be held at Barbagallo Raceway, but since it was axed off this year’s calendar, QR will step into the breach.

Each entry will be allocated 20 Dunlop Sprint tyres for the round and will use them in every session. Last year at QR, the V8s competed there with just one set of Sprint tyres which had to be used at least once in the two races.

Dunlop Super Dealers FPR driver Steven Richards said that there are two factors which teams will need to carefully consider when using the sticky rubber over the course of the entire Ipswich 300 weekend.

“It will be unbelievable hard on tyres there for two reasons. It’s already very hard on the left rear and secondly the temperature,” he told Speedcafe.com.au.

“I think that it’s great that we go to another circuit where we use the Sprint tyre for the full round. It will be interesting.

“There’s no doubt from a driver’s perspective, they’re fantastic to race race on while they’re working well, but it will throw up a fair amount of strategies when we use it for the full round.”