Wheel change for Car of the Future mooted

Wheel change for Car of the Future mooted 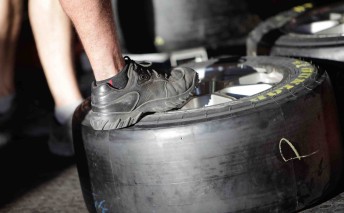 Part of the ‘Car of the Future’ could see the introduction of 18-inch wheels to the V8 Supercars Championship Series.

Since the inception of the V8 category in 1993, it has used 17-inch wheels, but a change is being mooted in an effort to save costs – part of the make-up of Car of the Future.

Team owner and V8 board member Paul Morris told Speedcafe.com.au that an 18-inch wheel makes a lot of sense.

“Personally, I think a move to an 18-inch wheel would be a good thing for a lot of reasons,” Paul Morris said.

“We can upgrade the brake package to the car and get the consumable of the brake wear down. Brakes are a big cost, so if we can put a better brake on the car then you don’t use as many. That will save the teams a lot of dough.

“It also opens it up to more relevance to what you see on the road too.

“There’s a lot of pluses for it and no minuses, except that we’ve always had 17 inch wheels and we like them.”

The other benefit of an 18-inch wheel is that the category would have more control tyre supplier options. More tyre manufacturers have race-ready 18-inch tyres in their stocks, although they would need to be specifically designed built for V8 competition. Dunlop has been the control tyre supplier since 2002 and currently holds the deal until the end of 2012.

V8 Supercars recently introduced a new 17-inch control wheel that is being phased in. All teams must compete with it in every session before next year’s L&H 500 at Phillip Island.

All of V8 Supercars’ Car of the Future plans will be revealed in Melbourne on the Monday following the Australian Grand Prix.