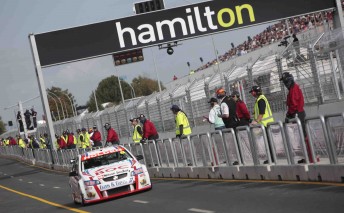 Slow pre-race ticket sales for the ITM Hamilton 400 are causing a stir amongst the race’s organisers.

In five weeks time, the third-running of the Hamilton street race for V8 Supercars will go ahead on April 16-18, and stuff.com.nz reports today that event organiser Dean Calvert is taking a hit to his personal finances to ensure the race meeting goes ahead.

A V8 Supercars spokesman told Speedcafe that pre-ticket sales have been low, but in past years, a late flurry of tickets have been purchased.

Race director Steve Vuleta told stuff.com.nz that the local race fans need to support the event if they want to keep.

“Ticket sales are considerably down on where they have been and we need Hamiltonians to get back to supporting the event like they did when the council made the prudent decision to put their hand up for it,” Vuleta said.

“The event is only safe provided ticket sales increase dramatically. We can’t keep taking personal hits like this.”