Teams say ‘suck it up’ after black flag

Teams say ‘suck it up’ after black flag 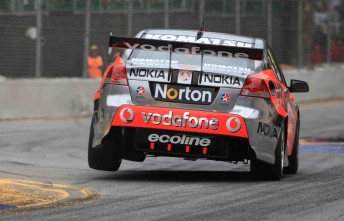 Team players in the V8 Supercars Championship Series have said that TeamVodafone need to ‘suck it up’ after its black flag penalty in yesterday’s second leg of the Clipsal 500.

Championship leader Jamie Whincup had to visit pit lane in the late stages of Race 6 of the championship when his rear diffuser became dislodged – even though the offending diffuser detached itself from the car before the pit lane visit was served.

Both team owner Roland Dane and Whincup were outspoken in their thoughts of the race-ruining penalty, but V8 team members have said that this sort of outcome is nothing new in the sport …

“Some people, whether they’re running second or 20th in the field, think they’re hard done by with those types of black flag incidents,” said Brad Jones Racing co-owner Kim Jones.

“In reality, everyone plays to the same set of rules and they need to cop it on the chin. Maybe they should bolt their diffuser on better …

“Yes, its unfortunate that it happened, but at the end of the day, we don’t have control over all of these things, and it produced a great race, a bit of excitement and a different podium. Is it really a bad thing? Maybe from Roland’s point of view it is, but from a consumer’s point of view, it was a good thing.”

Race winner Garth Tander claimed that Whincup’s brake lights were on for all of Saturday’s race – and he has been penalised for similar incidents in the past.

“There was a thing when Jamie’s brake lights were on for the whole race and nothing was done about that. I’ve been given a drive-through penalty for that in the past when they weren’t sure if my pit lane light was working. Hopefully there’s a bit of consistency there moving forward.

“In the development series race, Nick Percat got a black flag for a mirror hanging off. That was pretty innocuous, so it’s been pretty consistent over the weekend.”

Jim Beam Racing’s James Courtney was behind Whincup and may have been responsible for the diffusers dislodgement.

“It was hanging off, and he got done for it,” he said.

“It’s happened to me before – you get black flagged.”

For more on the subject of the penalty, CLICK HERE for Monday AfterNoonan …