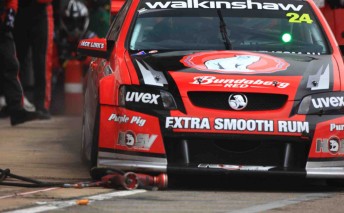 Andrew Thompson did not complete one race lap when he trashed his #10 Commodore VE in Saturday qualifying, ruling him out for the weekend. After assessing the damage, the team sent the car back to Melbourne on Saturday to get it repaired properly for the non-points round at Albert Park in two weeks.

The New Zealander took 27th, 16 laps behind the leader due to a tail shaft problem. A replacement was fitted to ensure he finished the race and salvage some points.

Over the weekend, Coulthard also had two pit lane issues. On Saturday, he clipped one of Garry Rogers Motorsport’s tyres, and on Sunday, completely ran over GRM’s wheel gun (see picture)

“It was disappointing really,” said Coulthard.

“I have had that feeling before when we had a tail shaft let go at Bathurst in 2009. I said to the boys over the radio that we had a bad vibration and it’s getting worse so we need to pit. We pitted and fixed the problem but there’s a difference between a DNF and last and at least we managed to get some points.

“What else can you say really? I think we have made improvements with the car, which is promising. Now we will look to the Grand Prix and hopefully we can have a good outing there.”