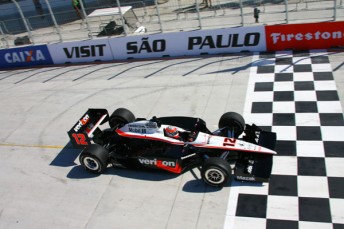 Will Power was fastest in IZOD IndyCar Series practice on the streets of Sao Paulo, Brazil

Verizon Team Penske driver Will Power has topped practice for the opening race of the 2010 IZOD IndyCar Series on the streets of Sao Paulo, Brazil.

The Aussie topped the final practice of the day, a session that was meant to be qualifying for the season opener.

Treacherous conditions, however, have meant that qualifying has been moved to the morning of the race to allow for track modifications to take place overnight.

The concrete surface on main straight of the circuit is so smooth and slippery that drivers were wheel-spinning and oversteering the entire distance of the frontstretch, even causing Ryan Briscoe and Ana Beatriz to spin on the straight.

Major grinding work will take place overnight to give the IndyCars more grip, with Power praising the Tony Cotman-designed circuit.

“I think it was a good decision to qualify tomorrow.

“It is a little tough going down the slippery start/finish straight. It will be a very physical race.

“Everyone got closer (in lap times) toward the end of the (final practice) session, which will make qualifying tighter and make it better for the fans.” 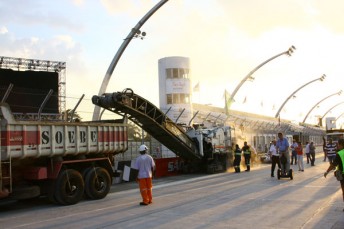 Ryan Briscoe was 11th fastest, one spot ahead of Danica Patrick. The Target Chip Ganassi pairing of Dario Franchitti and Scott Dixon were fifth and seventh respectively. Justin Wilson was again impressive in fourth place.

Brian Barnhart, president of competition and racing operations for the sanctioning Indy Racing League, met with drivers and team owners/managers mid-afternoon to devise a schedule that seeks to provide a safe racing environment and a good show.

Promoter Bandeirantes and race circuit designer Tony Cotman brought in grinding equipment following the final practice session to work on the concrete surface where drivers transition from the asphalt and the 180-degree Turn 11 of the 2.6-mile, 11-turn course.

A statement from the Indy Racing League officials read:

“We continue to work with circuit designer Tony Cotman and the promoter to fine tune the track with the feedback we’ve received from the drivers. This process is no different than any other new circuit we visit for the first time.

“Tony Cotman has done a great job creating a fast and racy track that will be a challenge to these world-class competitors while putting on a great show for our enthusiastic fans. We appreciate our drivers’ feedback as we want to make this a track they will enjoy to drive.”