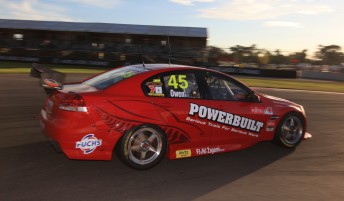 The speedy Victorian is not confirmed as a starter for the rest of series, as the GMR team put him in the car to prove the ex-Tasman Motorsport’s Commodore’s competitiveness. Owen will drive for TeamVodafone in the endurance races and used this round to keep race miles up.

Could he drive again this year? GMR Team manager Dean Lillie told Speedcafe.com.au that there’s a chance, however, it will come down to budget.

In the meantime, Owen was pleased to get the win, the laps and the trophy.

“It was a real positive turnout this weekend and it worked out well for Greg Murphy Racing,” Owen said.

“To be honest, my priority is getting laps and if it turns out that someone else jumps into that car because they realise how good of a team it is, then so be it.

“We’ll have a lot of ride days throughout the year and a lot of test days but there’s nothing like racing on a new tyre, qualifying and driving in race conditions, that will be invaluable come October.”

Norton 360 Falcon BF driver James Moffat finished second, but knowing that Owen is likely to be out of the running in the next round, second place was like a win.

“It’s a solid start to the Championship for us,” he said.

“It would have been nice to challenge Steve a big more. I’m still settling into this new car. Obviously an ex-FPR car is massively different to what I was racing last year which was an ex-Triple Eight car, so the characteristics of both cars, particularly around here, are quite a bit different.”

Pederson’s result was good enough to be classed as third overall for the weekend.

The next round of the Fujitsu V8 Series will be held at Queendland Raceway on April 30–May 2.