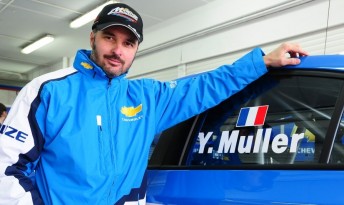 Yvan Muller will drive with Greg Murphy in the V8 Supercars endurances races this season, pending a date clash with his regular drive in the World Touring Car Championship.

The factory Chevrolet driver has been sent a contract to compete at Phillip Island and Bathurst in the Castrol Racing Commodore VE with Murphy, but Muller can not finalise the deal until the WTCC sort a date change on its calendar after the Mexico round of the championship was recently canned.

If the WTCC schedule the new race date on either the Phillip Island or Bathurst dates in Spetember and October respectively, the Frenchman’s chances of driving with the team will be in jeopardy.

The FIA decided to cancel the proposed second round on security reports from the region. The promotors of the event said that if the Mexico round is replaced, it is likely to be scheduled between the Valencia and Okayama rounds. The Valencia round is a week after Phillip Island, while the Okayama meeting is in late October, meaning a possible clash with Bathurst could force Muller out.

But other than that, the former world champ is set to saddle up alongside Murphy.

“I’ve sent him a contract, but the only thing that could possibly make things a bit difficult is replacing the Mexico round of the World Touring Car Championship. His commitments to that overrides anything we do, and the professional guy that he is, he’s got to see what lands there before he can let us know what he can do for us.”

Morris said that the deal came about through his team’s connection with Triple Eight Race Engineering. Triple Eight boss Roland Dane, who supply’s V8 Supercars chassis to PMM, hired Muller to drive with Craig Lowndes in the 2005 endurance races, with the pair winning the 2005 Sandown 500. To date, it remains the only time that a non-Australian/New Zealander has won a round of the V8 Supercars Championship Series.

“I haven’t had much to do with him in the past – only as a competitor. We obviously need someone to drive with Greg that can do a good job.

“We were talking with Mark (Skaife). Greg and Mark had a good thing going last year, but Mark decided to do what he was doing (with Triple Eight), and we ended up with Yvan. It was the most logical choice.”

While Murf’s team-mate is all but set, Morris himself will pair up with Russell Ingall in the Supercheap Auto Commodore VE.