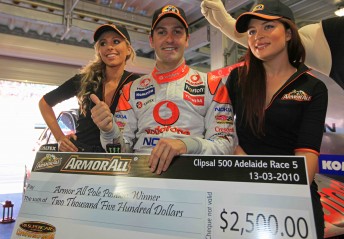 Jamie Whincup takes the $2500 prize for pole from Armor All

Jamie Whincup has maintained his supreme form around the streets of Adelaide, claiming pole for today’s Race 5 of the V8 Supercars Championship Series.

Tander was provisionally the fastest driver, but could not beat Whincup’s time.

Lining up alongside Winterbottom will be his FPR stable-mate and stand-out Clipsal man Paul Dumbrell in The Bottle-O Racing Falcon.

D’Alberto’s place in the top 10 was the first time he has achieved that position.

Bundaberg Red’s Racing Andrew Thompson collected the wall hard at turn eight and has been ruled out of this afternoon’s race due to the damage.