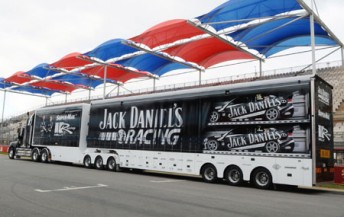 Trucks, transporters and pit garage set-ups all return at first domestic event of the V8 Supercar season in Adelaide

The Clipsal 500 in Adelaide marks the first Australian event of the 2010 V8 Supercar season and with that comes the debut of many of the more spectacular sights in the V8 Supercar paddock.

The flyaway races in the Middle East meant that teams did not unveil things like truck and transporter liveries, pit garage set-ups and marketing activation sites until Event 3 of the season in Adelaide.

Jack Daniel’s Racing has gone all out with the livery of its new transporter, unveiling a unique ‘wrap’ that imitates a taut-liner trailer pulled back to reveal Todd and Rick Kelly’s Jack Daniel’s Commodores.

The livery is made up of 280 metres of vinyl and required around two litres of ink, all printed on a 1.5 metre wide Océ solvent printer at Kelly Racing’s workshop. Chrome is all the rage at Team Vodafone in 2010

“Finishing the truck this year was a lot of fun and we definitely wanted to do something different,” said Rick Kelly.

“The 3D idea actually came from (former Managing Director of Brown-Forman Australia) Michael McShane himself, so it was straight from the top.

“We got our designer to implement the ideas and marry lots of photos into one and we think it’s worked out really well.

“It’s a pretty complicated process but the end results is pretty cool.

“We like to do things a little bit differently and although it was a huge amount of work, I really enjoy going the extra mile with Dale (Wood) with the sticker work.” While not all teams have been able to re-livery their trucks in time for Clipsal, there are plenty of bright and shiny examples on display in Adelaide, including Team Vodafone example, which like its Commodores features plenty of slick chrome.

Most teams enjoy sponsorship from truck manufacturers making bragging rights in the truck game in the paddock.

Another piece of equipment to turn heads on its debut in Adelaide is the new Toll Holden Racing Team pit awning.

Sitting in the prestigious position as the first garage in pit lane, HRT has gone the extra mile with the new structure, which includes two embedded TV screens.