The busiest race meeting of the V8 season

The busiest race meeting of the V8 season 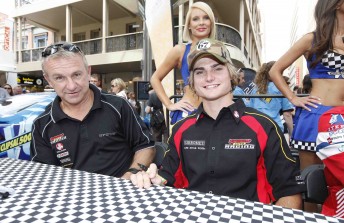 The Clipsal 500 meeting is regarded as one of the toughest races on the V8 Supercars Championship Series calendar – both on and off the track.

Sponsor engagements, public appearances and media calls are the order of the weekend – and then there’s 500km of hard racing around the toughest and most unforgiving race track on the V8 schedule.

It is a tough week for every V8 Supercars driver – whether they regularly occupy the front or the back of the grid. For Tim Slade, the Clipsal 500 is a major meeting on many levels. The South Australian-born driver is only in his second year of V8 competition, and while he is trying to make his own mark in the competitive field, he is one of few local drivers competing this weekend. Besides that, he is driving for a team that has a large corporate presence at the track – and he is the focus of some of the local media.

With no disrespect to Slade, he doesn’t command the outright attention of the Craig Lowndes and Garth Tanders of the world, however, that doesn’t mean that he can avoid the spotlight.

“It’s probably one of the biggest weeks for media and PR stuff,” he told Speedcafe.com.au.

“The event has a huge corporate following, so it’s not just the on-track stuff which is tough. You drive the car, do a quick debrief and then you’re meeting and greeting with a group of corporates, signing autographs going to other events around the track. It’s a huge week.”

Slade drives the #47 Wilson Security Racing Falcon, prepared by Stone Brothers Racing. His entry features a lot of sponsors that are proactive in their involvement at the Clipsal 500. He says that it takes a lot of focus to be at your best – in the car and in front of the crowd.

“It’s one of the things that you have to learn. When you get to the Main Series, and you’re driving for a team with multiple sponsors – Wilson Security, Lucky 7, Doric, plus others that are on just for Clipsal – you have to keep those people happy,” he said.

“It’s not so bad for the established guys because they are on top of their game on the track, but for me, while I’m still trying to get the most out of myself, it’s something that you really have to keep separate. When you get in the car, you have to make sure that your mind is on the job – and vise versa.”

The Adelaide street race was Slade’s Main Series debut last year – and it ended sooner than he’d hoped. Driving for Paul Morris Motorsport, he left the meeting with zero points in the bag due to two incidents. Twelve months on, he recognises that he has matured and improved his craft.

“At Clipsal last year, it was a pretty big thing for me – first race in, and as much as I didn’t know it at the time, it was a bit surreal and I was a bit overawed by it all,” he said.

“I feel like a completely different person now. My pace was reasonably good there – I qualified in the top 20, but as far as my racing side of things go, it’s like chalk and cheese. Even the last half of last year, I felt a huge improvement.”

Slade currently sits 16th in the series after the first four races. After competing at two tracks which he’d never seen before, he’s pleased to be on familiar territory.

“I’m looking forward to getting to a track where I’ve done a few miles,” he said.

“Every time we hit the track, it goes faster, so I can’t wait for this weekend.”