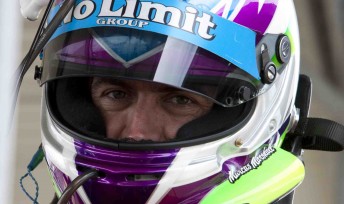 Marcus Marshall has stated his intentions for 2010 – do a solid job in the endurance races with Jim Beam Racing and get back into a full-time seat in 2011.

The Tasmanian-born driver will saddle up in either the #17 or #18 Jim Beam Falcons in this year’s endurance races, and wants to use that as a launchpad back into the main game.

Marshall has lived through a stop-start V8 career to date. He has driven as a full-time steerer in two seasons (2006 and 2008) with Paul Cruickshank Racing and Britek Motorsport.

This year, Marshall again failed to land a full-time drive, however, he told Speedcafe.com.au that his new deal with Jim Beam Racing for the endurance races will be his “rekindling.”

“This is definitely the rekindling of Marcus Marshall’s racing career,” he said.

“I haven’t been in good enough positions in the past to show teams what I can do.

“Not since 2003 when I drove for Team Brock – that was probably my best opportunity – and my first – and with two laps to go, we were on track to finish fifth (with Greg Ritter). That was my first race at Bathurst and that was probably the best equipment I’ve ever had.

“Since then, it’s been pretty thin, but that’s just the way it is and the choices I’ve made. I’ve learnt a lot from that, and I think at the moment I’m at the best as a driver and an athlete. I’m way more complete than I was years ago, and that’s going to go a long way to getting a top result out of the endurance races.

“Hopefully with that, I can do enough to move forward again in the V8 Supercars series.”