TeamVodafone blessed ahead of Clipsal

TeamVodafone blessed ahead of Clipsal 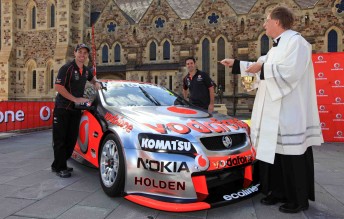 TeamVodafone has been officially blessed ahead of this weekend’s Clipsal 500 in Adelaide – the town known as the ‘City of Churches.’

But why does the most successful team and driver in recent memory need ‘help from above’ at the famous street circuit?

They don’t – they seem to do a good enough job on their own – but the champion team were there to talk to those present about road safety.

“It is good to come here to the City of Churches and have our new Holden blessed and highlight that road safety is important, both on and off the racetrack,” Whincup said.

With his good deed done, how does Whincup think his new Commodore will handle the bumps of the Adelaide circuit?

“I am looking forward to another big weekend at the Clipsal 500,” he said.

“It is going to be a totally different experience to previous years as we have four races under our belt and it will be the first time we race our new Holden Commodores on home soil.

“There is a lot of speculation about the how the cars will go on a traditional bumpy street circuit but I can’t wait to work with my team-mate, Craig Lowndes, to get the cars up to speed as soon as possible.”

The Clipsal 500 is the third event of the series and features two 250km legs across Saturday and Sunday.