Coulthard: I’ve put the first two behind me

Coulthard: I’ve put the first two behind me 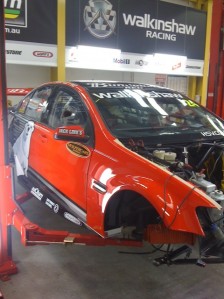 There was nothing ‘Extra Smooth’ about the Walkinshaw Racing’s trip to the Middle East.

Team drivers Fabian Coulthard and Andrew Thompson head to this weekend’s Clipsal 500 in 21st and 26th position in the V8 Supercars Championship Series – far below their pre-season expectations.

The Bundaberg Red Racing Commodore VEs simply did not suit the low-grip surfaces that the Yas Marina Circuit and Bahrain circuits offered, and Coulthard, who celebrates his 50th championship start at Clipsal this weekend says that with the team’s ‘proper’ stickers on the car, the championship starts now.

“I’ve put the first two rounds behind me,” he told Speedcafe.com.au.

“It’s just one of those things where I got thrown into the toughest possible situation – learning a new track, new team, new engineer – on two of the toughest tracks for our cars. I didn’t come away from it too flash.

“I was frustrated. I am hard on myself. I want to do the best I can. Driving around the back doesn’t fulfill my expectation, so it was disappointing.

“It hasn’t been the best start to the year. Now, we make a start fresh, and finish the championship and get the results that we really wanted from the get-go.”

With 22 races still remaining in the V8 championship, it’s anyone’s game, and Coulthard knows that the Walkinshaw cars have a terrific record at the Adelaide street track. They’d be no better place to kick start his title revival …

“You just need to look at the record of what Walkinshaw Racing has done in the past there – they’ve been very successful,” he said.

“Not just with the Holden Racing Team – all of their cars perform well there. Look at Cam McConville when he drove the WOW Commodore to the podium (in 2008). Their cars suit that track, so from my point of view, it looks positive.

“I’ll be going in with a positive approach, a good clear mind and a good attitude, so hopefully we can get some strong results.”

The Kiwi driver recognises there is a long way to go this year.

“The thing is, it’s a long championship and these Clipsal races are long races,” he said.