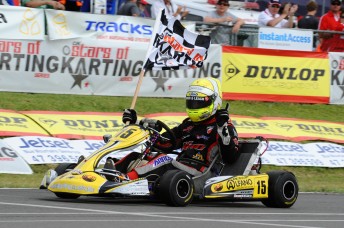 Matthew Wall celebrating his victory on the weekend in Newcastle. Pic: photowagon.com.au

Matthew Wall has won just about everything there is in Australian karting – except a CIK Championship, however, he is looking to change this statistic this year.

The 31 year-old started his chase for the Pro Gearbox (KZ2) Championship off in a sensational fashion in last weekend’s opening round of the 2010 CIK Stars of Karting Series in Newcastle.

After being upstaged by his younger team-mate, Chris Hays, during qualifying and the opening two heat races, Wall reigned supreme when the big points were on the line in Sunday’s pair of 25-lap races.

In the final race Wall got the jump off the start line aboard his Alfano-backed Arrow Kart in the second final of the day while Kel Treseder made his way past Hays second place.

By mid race Pro Karting Tony Kart driver Jordie Lindstrom and Justin Ruggier, both who had issues in the opening final of the day, had charged their way through the field to be in contention for a spot on the podium.

As the race drew to a close it was evident that Treseder was catching Wall, but even Treseder didn’t expect how close he would come to victory during his debut in the Gearbox class.

Exiting the final corner Wall made what he described as a ‘rookie error’ by slowing to begin his celebrations and came within millimetres of handing the win to Treseder on the line.

In the end, Wall crossed the line a mere 0.037 seconds ahead of Treseder. Lindstrom claimed third spot ahead of Woolston and Ruggier.

“That was a rookie error that almost cost me the win,” said Wall. 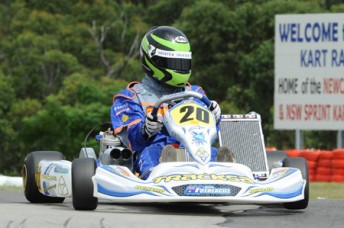 “I guess that I’ve been watching too much Formula One over the years where they slow down to celebrate and am very lucky to have got away with it.

“This weekend has just been fantastic to see the CIK style of racing back on track in Australia and it has got a lot of people in the sport excited. I can’t wait to get to round two in Ipswich.”

Cian Fothergill was beaten off the start by Hayden Bride in the final race for Pro Light (KF1), but when McBride encountered mechanic dramas allowing Fothergill to stream off into the distance.

As the race continued Anthony Vince and John Grother were closing in on the front-runners and the pair would eventually cross the line second and third respectively behind Fothergill in his Tracksa-backed Kosmic kart.

Unfortunately, for Grother he was later excluded due to an incorrect fitment of his timing transponder, which parted ways with his kart in the opening lap, elevating Vince to second and Damien Radosevic to third. 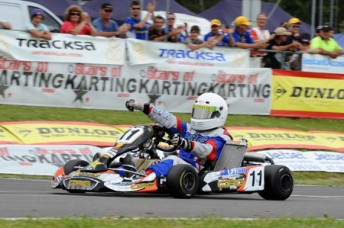 Sydney CRG driver Pierce Lehane was unstoppable during the return of the CIK style of racing in the junior ranks.

The 14 year-old from Castle Hill qualified on pole position, won all three heat races and both finals.

Behind Lehane it was Jonathan Venter who finished runner-up in Sunday’s pair of 25-lap races.

Brock Plumb crossed the line third aboard his Birel kart in the final encounter while Queenslander James Macken finished third in Sunday’s opener.

In the development categories, Daniel Baker put in a dominant performance in Clubman to start his campaign for the East Coast Title and trip to Japan courtesy of Yamaha Australia in a stylish fashion.  Local fast femme Bree Woodland upstaged many of her more fancied rivals to take out the Junior National category.

The next round of the 2010 CIK Stars of Karting Series will be contested in Ipswich, QLD on May 7-9.