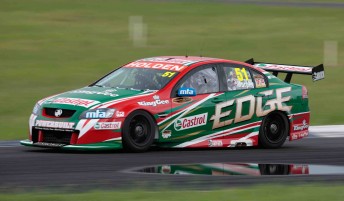 Murphy completed the 20 ‘shakedown’ laps allowed under V8 Supercar rules ahead of the car’s debut at this weekend’s Clipsal 500 in Adelaide.

The four-time Bathurst winner says the Triple Eight-designed cars are the real deal, and hopes that it can take him back to the top.

“After only a handful of laps I’m feeling very confident, the new Castrol EDGE Commodore feels ‘complete’ and performs all parts of the processes very well,” Murphy said.

“The Triple Eight-designed cars provide a very strong base to start from and I am very much looking forward to rolling the car out of the truck in Adelaide this week.”

The car is the second Triple Eight Race Engineering-designed chassis constructed by Paul Morris Motorsports as part of its technical alliance with the championship-winning TeamVodafone.

Murphy’s Castrol EDGE/PMM team worked around the clock to complete the new car,  finishing in the early hours of Monday morning before loading it into the team transporter for the trip, firstly to Queensland Raceway, then to Adelaide for the Clipsal 500.

“It has been a marathon effort by the Castrol EDGE/PMM team, an amazing effort since they returned from the Middle East just last week,” Murphy said.

“They were still putting the finishing touches to the car in the early hours of this morning before packing it in the truck for the test.

“They’d had only a few hours sleep, but the car ran smoothly and without fault, so I’m very impressed.”

The Castrol EDGE Commodore will get its first track time at Adelaide in the first practice session on Friday 9.30am.