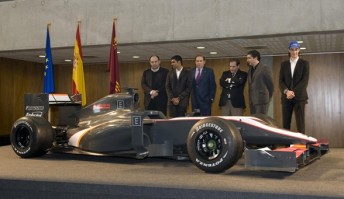 The HRT F1 Team at its launch in Spain yesterday

The Spanish-based outfit will hit the track for the first time without any pre-season testing at the season-opening Bahrain Grand Prix.

Team chairman Jose Ramon Carabante and team principal Dr Colin Kolles proudly unveiled the car, along with a number of key officials at the team’s home base at Murcia.

Kolles said that signing Chandhok is a great step for the first-year team.

“I am very pleased to use the Murcia site to officially unveil our car livery today that reflects the Murcia identity,” he said.

“We also complete the driver’s team line up with the Indian Karun Chandhok at the wheel of the car for our first-ever season. We have been very impressed with Karun’s performance in GP2. India is a great country. It will be great for the sport to have an Indian driver on the grid for the first Indian Grand Prix.

“Everything is now in place after an impossible race against time to register the team’s name and I truly believe that we have an excellent platform to build on and move forward for a strong 2010 performance.

“Now, we need to work together. We need to learn together and keep developing as a team.”

Chairman Carabantes said that he is proud of his team’s Spanish roots.

“The new HRT F1 Team, ‘Hispania Racing F1 Team’ is born in Murcia. I am proud to welcome you in Murcia where the team has its roots and to have given to my country the pride of the first ever Spanish Formula 1 team,” he said.

“The name of the team contains the word Hispania, which is not only the name of one of my companies, but Hispania was also the Roman name for the Iberian Peninsula. That reflects now our team’s new identity.

“2010 will be a major debut for the team and drivers at the wheel of our HRT F1 Team car.”

The Formula 1 season kicks off next weekend at the Bahrain International Circuit.

With Chandhok’s confirmation as HRT F1’s driver, the grid is Formula 1 grid is now set. Below is the list of drivers and teams that will compete in the 2010 Formula 1 World Championship.