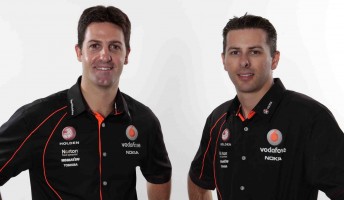 Steve Owen will compete in the opening round of the 2010 Fujitsu V8 Supercars Series with Greg Murphy Racing.

Owen, who has signed to drive with Jamie Whincup in the #1 TeamVodafone Commodore in the endurance races later this year, will compete in the ex-Tasman Motorsport VE, driven by Jason Bargwanna last year.

GMR will enter at least two cars at the Clipsal 500 meeting, with Owen being joined by Geoff Emery in his ex-Walkinshaw Racing Commodore VZ. Emery will drive the entire season for GMR, and team manager Dean Lillie told Speedcafe.com.au that having Owen (the 2008 Fujitsu Series champ) locked in the first round is the best way to put the rejuvenated team at the front of the pack.

“It’s obviously great to have Steve on board,” he said.

“Bringing his level of experience to our team isn’t a bad thing, and he was bloody quick yesterday. I think he was the fastest at the track, but I didn’t time every lap of every car, but from what we could gather, he was the pace-setter.

“We think he can be a front-runner at Clipsal, and that’s why we’ve got him for the first round. As a team, we need top results, and he is the best man to put in the seat to get that.

“It’s good for our team to have him and it would be good to have an early win on the board.

“There’s some pretty good contenders out there this year – James Moffat will be quick, whoever Matty White puts in will be good, and Tim Blanchard showed some pace yesterday. It will be pretty competitive.”

Owen could compete in the entire Fujitsu V8 Series with the team, but sponsorship will need to be sourced for that to happen.

Emery will compete in the ex-Walkinshaw Commodore, using a sequential gearbox and full-GMR engine package.

“It’s good to have Geoff with us for the year,” he said.

“He ran well yesterday at Winton. He ran in the mid-25s bracket, so he was happy.

“We’ve got a bunch of new crew members as well and everyone fit in well. It’s a short turn around between the test day and Clipsal, but it’s nothing out of the ordinary.”

Besides its commitment to the Fujitsu Series, GMR will also run Simon Middleton in a Porsche RSR in the Australian GT Championship. Middleton plans to up-spec to a Lamborghini later in the season. The team will also enter Tarmac Rally cars in Lake Mountain Sprint and Targa Tasmania, as well as service Tony Bates’s Commodore Cup car.