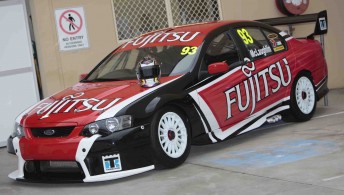 Johnny McIntyre will compete in the first round of the Fujitsu V8 Series at the Clipsal 500.

The New Zealander will substitute for regular driver Scott McLaughlin, who will not have the required licence before the first round.

McIntyre will also suit up for the SBR team in the V8 Supercar endurance races at Phillip Island and Bathurst, likely to team up with Shane van Gisbergen in the #9 SP Tools Racing Falcon FG.

McLaughlin, 16, will compete in three state Formula Ford rounds to ensure he has the correct racing license before his Fujitsu Series debut at Queensland Raceway in May.

McLaughlin tested the Stone Brothers Racing-prepared Falcon BF late last year (the chassis last raced by Shane van Gisbergen in 2008) and will get two test sessions this week (today and Thursday) at QR alongside McIntyre.

“We’re going to give most of the test time to Johnny, but we’ll still give Scott some more laps. Before Scott comes into the series at Queensland Raceway, we’ll give him another two days of testing,” he said.

“He needs a lot of miles on a lot of different days in the car. At the end of every day, he can think about it and try and pick up where he left off.

“We have had the one test day with Scott back in December, and we wouldn’t have proceeded with him for this year if that hadn’t gone well – which it did.

“He is still pretty young and hasn’t had much experience. We have low expectations, and he’ll have more pressure on himself that what anybody else has on him, but I think he’ll do a good job.

McIntyre’s entry in the Clipsal 500 Fujitsu Series race will be his debut in the development category.