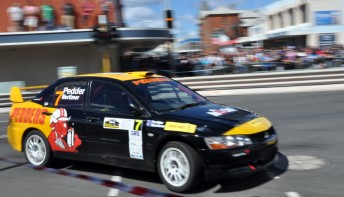 Scott Pedder on his way to victory in Rally Tasmania

“We’re ecstatic” said Scott Pedder. “It’s been over five years since Pedders Suspension Rally Team competed in the ARC and 20 since we’ve had a round win. Not only have Jon and I had a perfect result, having my brother Mark do so well after a five year absence is just brilliant”.

Evans Motorsport’s Simon and Sue Evans in their Tankformers WRX threw everything they had at the Pedders yellow and black Evo IX, but were unable to make any significant gains. The reigning 2009 Champions were not too disappointed, being in a new car and on a surface they are not overly familiar with.

“It was probably the hardest I’ve driven in a long time and the car held up really well- and it’s just good fun,” said Sue Evans. “We were both getting used to the new car. We had a bit of a spin and then had a chat on a transport stage- it was all good from then on.”

Despite what appeared to be a terminal blown engine gasket, Justin Dowel and co-driver Matt Lee put in the drive of the day and were able to not only nurse their Evo IX to the finish, but even maintain highly competitive stage times and hold on to their overnight third place.

“We’ve had a few head gaskets in the past and we backed the timing off to take some of the power out of it,” said Justin Dowel. “We knew that taking the chance of replacing the gasket was just too risky. But it’s a great result and we’ll now look forward to hitting the gravel.”

After what was looking like a weekend to forget, Eli Evans and Glen Weston were able to salvage both pride and points after finishing third in today’s final leg. Persistent tyre and handling issues undermined what appeared on paper to be an ideal weekend to snatch a victory for the distinctive Honda Civic Type R.

Attention will now turn to the more familiar marbles and forest roads of Western Australia when the Championship continues in round two at the 2010 Quit Forest Rally on 16-18 April.