Steve Johnson has paid tribute to his uncle – Dave ‘Dyno’ Johnson – who has retired from his involvement from the longest-standing team in the V8 Supercars pitlane.

‘Dyno’ Johnson, a regular in the Australian touring car paddock for the past four decades, has retired from full-time motorsport after serving as a race mechanic and truck driver for Dick Johnson Racing – the team made famous by his older brother Dick.

Dick Johnson did not make the trek to the Middle East for the Abu Dhabi and Bahrain V8 rounds.

Steve, the driver of the #17 Jim Beam Racing Ford Falcon, son of Dick and nephew to ‘Dyno’ says that his uncle knows that it’s the right decision for him to make. 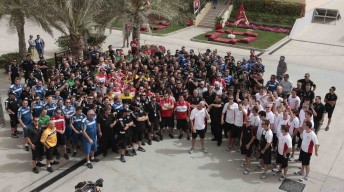 “I was emotional when he pulled me aside and told me what he was doing,” Johnson said.

“He pulled me aside and told me before he told the rest of the team. It is disappointing in a way, but I can understand why he’s doing it. We’re not getting any younger, so there’s got to be a time and if you’ve had enough, and you can’t put in 100 percent anymore …

“I know him well, and if he can’t put in 100 percent or isn’t motivated as he used to be, he just won’t do it, and that’s fair enough. He wouldn’t want to let Dad down or let the team down by doing a half job.

“He’s been away a lot, he’s got a family like all of us and he deserves to spend a bit more time with them.”

Johnson says that it could be argued that no one has done more work in Australian Touring Car racing compared to Dyno.

“He’s done as many hours than anyone up and down pit lane. He’s been in it for a long time and started from the word go,” he said.

“He had a year or two off in the middle, but he came back, and he’s a hell of a guy to have around the team. He’s done the hard yards and driven the truck everywhere.

“Up until recently he’s done the gearboxes and diffs and had a very big role in the team. It will be sad to see him go, but I think he’s due for a well-deserved break.

“We are a very family-based team, so to have family members around is always great – whether it’s your parents, your uncles, brothers and sisters, whatever it may be is huge.”