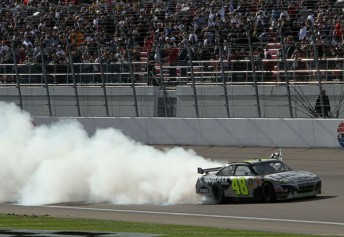 Gordon led more than 210 laps of the 267-lap event before losing the lead to Johnson, who seems hell-bent to win his fifth NASCAR Sprint Cup Championship before Gordon does.

Johnson won last week at Auto Club Speedway and told members of the media leading up to Sunday’s race he could care less about the people who think he’s tainting NASCAR racing with his dominance.

“You compete to win,” said Johnson.

“I’m not going to apologise for winning,” he said. “I want to win every race.”

The race saw the end of the fairytale start to the season for Earnhardt-Ganassi Racing, with Jamie McMurray crashing out team-mate Juan Pablo Montoya.

“Every time I am around him, he wants to run the shit out of me. On the restart I was inside of him, I think he got tight and never lifted … and he just plain and simple just wrecked us.

“He is just trying to prove to people he can drive a race car and I guess he isn’t doing too many favors on this team.”

The third race of the season saw Ambrose finally get a solid finish after two straight engine failures.

The Aussie moved up the order after starting 32nd and in the end posted a very respectable 14th place finish.

Ambrose was relieved to get his first solid points haul of the season.

“Well we finished and that’s more than what we’ve done the last two. Our season starts right now,” said Ambrose.

“We’ve got ourselves in the back in the forty (in the points standings), that helps us get out of a hole here. We are worried about getting inside the top 35 in points but if we get a couple more good races like that we’ll be fine.”