Holden heavies rule themselves out of title

Holden heavies rule themselves out of title 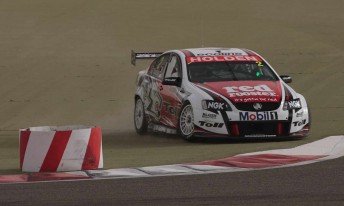 Garth Tander had another difficult round at Bahrain

After just four races, two of Holden’s heavy-hitters have written off his chances of winning the 2010 V8 Supercars Championship.

Toll Holden Racing Team’s Garth Tander and Jack Daniel’s Racing’s Todd Kelly have conceded that this year won’t be the season that they score the major trophy.

Tander and Kelly are currently 20th and 27th respectively in the V8 standings and are more than a full round’s worth of points behind unbeaten TeamVodafone leader Jamie Whincup.

“The team didn’t get the result it deserved and it’s hurt us in the championship, so we forget about that now,” Tander said.

“I’ve never won a race in Adelaide, so the focus is to go there and win both races. We’ve got two marquee events coming up in Adelaide and Hamilton so we’ll go on an event by event basis and go for the wins.”

Kelly is in a similar frame of mind.

“For me, I need to qualify better and win races and not focus on the championship too much now because that’s pretty much over and out,” he said.

“We’re chipping away at it. We’ll definitely be in contention for the year.”