Haslem and Checa kick off WSBK is style

Haslem and Checa kick off WSBK is style 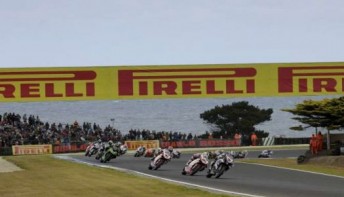 In front of over 50,000 spectators, the World Superbikes put on a great show

In front of 65,500 fans, Haslem and Checa took narrow victories, including a photo finish in Race 1. It has set up a fascinating season.

It took a close look at the photo finish images to split Haslam from his race long rival Michel Fabrizio (Ducati Xerox), with only 0.004s separating the pair. It was the closest ever finish in the WSBK class, and Leon’s first career win.

Fabrizio was originally awarded the victory but before the slow down lap had been completed, Haslam was confirmed as the winner. Noriyuki Haga took his Ducati Xerox machine to third, being part of the leading battle throughout.

In Race 2, Checa won another thriller, by only 0.307s from Haslam. Third went to Fabrizio, but a great ride from new SBK rider Sylvain Guintoli put him fourth on his Suzuki Alstare machine in only his fourth-ever SBK event.

Checa was pleased with the way his title chase has started.

”The plan was to start the second race well and we chose a softer tyre,” he said.

“We changed the bike and we improved in the braking points, so I could overtake people. When you are close to four other riders it is not easy to overtake and make it permanent but I passed in the right time and at the right places. This was one of the best races in my life, so thanks to my new team.”