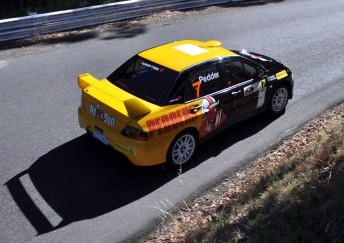 Scott Pedder holds a commanding lead in the Australian Rally Championship section of Rally Tasmania outside Burnie with one day remaining.

Returning to the ARC after a three year absence, Pedder showed outstanding speed in his Mitsubishi Lancer Evo IX over the tarmac stages. He and co-driver Jon Mortimer won five stages for the day to finish over half a minute in front, while many others struggled with tyre problems.

“It’s been a good day. We were wearing our tyres down a little bit towards the end but we expected that, so generally everything is going very well,” Pedder said.

In second place is Simon Evans in his Subaru, but tyre woes complicated his day as he fought to keep up with Pedder’s pace.

“I’m driving the best I’ve ever driven,” he said. “I’m really happy with the way we are driving and the car’s handling superbly – we’re just at a disadvantage with the new control tyre.”

The news was even worse for younger brother Eli who delaminated four tyres on his Honda Civic. It had been a great start to the day for the Honda driver, who took the rally lead after the first stage of the day, but it all went downhill from there.

Victorian Justin Dowel moved in to third place in his Mitsubishi Lancer, at the expense of Glen Raymond, whose Mitsubishi struck clutch problems late in the day.

Mark Pedder is fourth in a Mitsubishi, ahead of Queenslander Ryan Smart in a Toyota Corolla.

The final day of Rally Tasmania will see competitors contest another eight special stages, with a competitive distance of nearly 56 kilometres.

The rally finishes with two stages around the streets of Burnie, in front of an expected crowd of 5000 people.