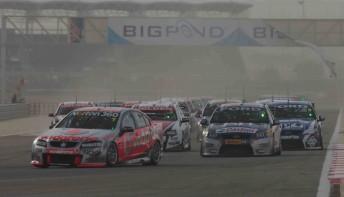 The start of Race 3 at Bahrain (note the Bigpond sign didn't make it through the first lap unscathed!)

V8 Supercars Australia has announced another significant telecast deal with international broadcaster ESPN STAR Sports, which will deliver the Championship to 339 million subscribers in the key Asian market.

V8 Chairman Tony Cochrane announced the finalisation of the deal which comes a few months after Speed Channel in the US, with 79 million subscribers, came on board to broadcast the Championship.

In a third significant deal, Fox Sports has also signed to show delayed telecasts in Australia.

ESPN STAR Sports is a 50:50 joint venture between two of the world’s leading cable and satellite broadcasters.

“The ESPN Star agreement adds a huge amount of subscribers to our international footprint which, along with Speed Channel and Fox Sports, means our great sport can now be seen just about anywhere around the world,” Cochrane said.

“For our Championship, sponsors and teams this is fantastic news that will further grow the sport and boost interest levels around the world. It is one of the most significant television deals in the history of V8 Supercars.”

Fox Sports returns to cover the Championship in 2010 after a brief absence, again adding to the national and international reach of V8 Supercars.

“We are delighted to have Fox back on board,” Mr Cochrane said. “Australians are significant pay television viewers so if they want to catch the mostly live telecast on Seven or on delay on Fox they have the choice. Or they can watch it twice.”