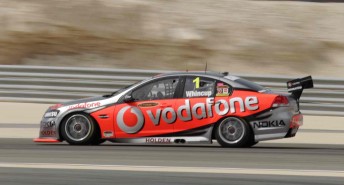 The TeamVodafone star dominated Race 3 of the V8 Supercars Championship Series at the Gulf Air Desert 400 at the Bahrain International Circuit, maintaining his unblemished 2010 record. Jamie Whincup on the Bahrain podium

Whincup made the perfect start from pole position and led every lap of the race, and while he doesn’t like to talk about career statistics at this point of his career, he recognises the significance of this victory.

“Every race win is special in its own way, and today is a great day for myself and TeamVodafone,” he said.

“Pole this morning was definitely one of my best. We got off to a reasonable start and controlled the race. The car was fantastic, the strategy was excellent and we brought it home strong.

“The tyre degradation here is massive. They go off like you wouldn’t believe and we drop seconds off our lap times. It was hard to keep the car on the track.

“200km is a long way, it’s very hot. Abu Dhabi was a nice cool night, but here it’s during the day. Our tyres were well worn out by the end but I was glad to hold ‘Frosty’ out.”

Orrcon Steel FPR driver Mark Winterbottom finished second, his third podium place in a row for 2010. After swamping Shane van Gisbergen off the line at the start, Winterbottom was passed by Craig Lowndes during the first round of pit stops, but Winterbottom hunted him down and got back by at turn one on lap 22.

‘Frosty’ promises his chance at the top of the podium will come soon.

“The day will come, but at the moment, we’ll just keep tuning what we’ve got, keep learning, and when the time comes, it will all click,” he said.

“But at the moment, two seconds and a third this year is a great start.”

“I think Tony Cochrane will be happy with me – trying to come back through the field is not that easy,” he said.

“Luckily, this circuit lends itself for quicker cars, and there’s a couple of good passing opportunities, but I’ve got to get the top 10 shoot-out right.”

Garth Tander took a consistent approach to take fourth place – erasing the memories of his poor start to the year at Abu Dhabi, and he’ll be one to watch tomorrow. Due to being in the bottom 50 percent of the field, Tander gets an extra set of fresh Dunlop tyres, and he’s got a healthy bank of tyres for the next 200km race …

Todd Kelly was in line for a seventh place finish but the team’s gamble on an early pit stop did not pay off and eventually dropped to 20th when he had to take an extra stop for fuel with two laps to go.

In the problems department, Steven Richards endured brake problems early in the race, sending him many laps down. Dean Fiore had an engine issue, while Daniel Gaunt hit the wall at the end of turn three.