Hulkenberg fastest in Day 2 at Barcelona

Hulkenberg fastest in Day 2 at Barcelona 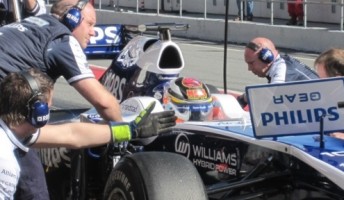 Nico Hulkenberg during a pit stop at Barcelona today

The form guide for the 2010 Formula 1 season was turned upside down again during the second day of testing at Barcelona today.

The German driver, who will partner Rubens Barrichello in the all-new driving line-up at the famous team, was pleased to end the day at the top of the times.

“We’ve had a good test here. P1 today is nice but means nothing, to be honest,” he said.

“It’s positive for the team, and for me, to know what the car can do though. We did a lot of set-up work today and have found some interesting things so I feel ready and confident to go to Bahrain now.”

Alonso was second at his home track, running a variety of different aerodynamic tweaks over the course of the day.

Both Hulkenberg and Alonso’s times were well faster than Mark Webber’s efforts in his Red Bull machine yesterday.

Mercedes driver Michael Schumacher and McLaren’s Lewis Hamilton were not dragged into the chase for lap times, concentrating on long race-distance tests.

Two days remain at Barcelona before the teams prepare for the first round of the season at Bahrain on March 12-14.