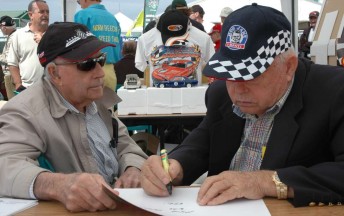 Australian motor racing legends will be out in force to celebrate a huge Phillip Island Classis on March 19-21.

Triple World Champion Sir Jack Brabham, as well as other multiple Australian open wheeler, sports car, touring car, sports sedan and rally driving champions will be on hand to meet fans and sign autographs at the Shannons Super Rig in the Paddock area during the three-day meeting.

Only 540 of those cars are expected to take to the circuit for more than 30 events over the weekend because many fields exceed the maximum allowable Phillip Island track density.

An all-time record 36 Formula 5000 V8 open wheelers will also be on the grid, while eight Formula 1 cars, including three 1.5 litre Turbo cars from the 1980s, will compete.

“This is the greatest line-up of famous Australian drivers ever assembled at an historic race meeting,” said the Victorian Historic Racing Register’s Ian Tate.

“We are not twisting any arms – they all want to come because they have either experienced or heard about what a fabulous weekend it is.”