Another day, another pole for Whincup

Another day, another pole for Whincup 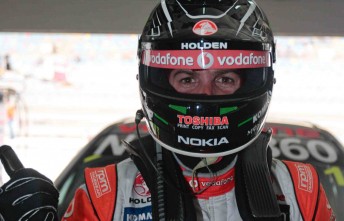 TeamVodafone’s Jamie Whincup has done it again – qualifying on pole for Race 4 of the Gulf Air Desert 400 at the Bahrain International Circuit.

Almost every car and team waited until the dying moments of the session to strap on their best set of tyres for a late dash for pole, with Whincup coming out on top.

Whincup said that conditions in the session were tough.

“That was a massively tough session. The conditions had changed quite a lot from yesterday,” Whincup said.

“It was extremelly dusty with the wind change, so we made a guess on the car – I didn’t get the best out of my lap, which proves that I don’t think that anyone got a good lap in. I made the best out of the situation.

“Everyone of these poles and races is a stand alone event, so to get another pole is a big boost for our team.”

The man on pole position isn’t a surprise, and neither is the guy who’ll line-up alongside him. Orrcon Steel FPR’s Mark Winterbottom will start from second and is clearly emerging as the man most likely to upset Whincup’s incredible run of wins this year.

“Like Jamie said, the track was massively different,” he said.

“It’s like a shoot-out – everyone gets one lap on the green tyres. I had big understeer and had to shut it off in the second sector and it cost me tenths.

Third place went to the ultra-consistent James Courtney in his Jim Beam Racing Falcon FG, ahead of Toll HRT’s Will Davison and Fujitsu Racing’s Lee Holdsworth.

The race is set to be a case of ‘who has the best available tyres.’ Toll HRT’s Garth Tander will start seventh and has a good tyre bank, as does Dunlop Super Dealers FPR man Steven Richards, who had brake dramas in yesterday’s race. Richards will start 10th.