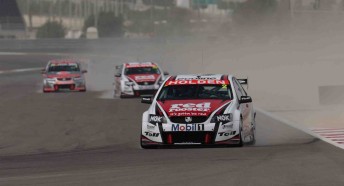 The V8 Supercars during qualifying at the Bahrain International Circuit (note the dust storm prior that hit the track prior to the session!)

FOX Sports will screen every championship round of the 2010 V8 Supercars Championships Series in full this year.

V8 Supercars Australia executive chairman Tony Cochrane said that the new deal is a huge coup for the fans.

“We are absolutely delighted to enter this agreement with FOX Sports,” he said.

“Is a real win for our many fans at home.”

FOX Sports chief executive David Malone said that bringing the V8s back to Fox is a major step forward for the network.

“I’m thrilled to welcome the V8 Supercars Championships back to FOX Sports,” he said.

“FOX Sports will screen every championship round of the 2010 V8 Supercars Championship Series in full, adding more quality motorsport to our current stable which includes the World Superbikes and NASCAR.”