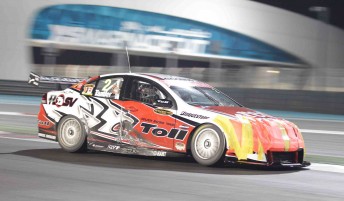 Leading Ford V8 Supercar driver Mark Winterbottom says that only a fool would write off the Toll Holden Racing Team after their poor first round at Abu Dhabi last week.

The Orrcon Steel Ford Performance Racing driver, currently second in the V8 Supercars Championship Series, says that even though the two HRT drivers are running 25th and 28th (Will Davison and Garth Tander respectively), he knows the strengths of his factory rival.

“You can never write off HRT. It’s only Round 1,” the factory Ford driver told Speedcafe.com.au.

“People have DNFed a whole round and still won the championship, so you can never write them off. Garth (Tander) was showing pretty good speed out there. Will (Davison) struggled in Race 2 for whatever reason, but you can’t write off HRT. It is one of the best teams in the paddock. If anyone will bounce back, it’s those guys.

“Everyone has a bad round, and HRT has had its now. It just means that they have to be good for the rest of the season. They’ll be back.”

“If it happens to them at Bahrain this weekend and at Clipsal, it would be hard to come back, but Round 1 is a small piece of the puzzle, really.”

Winterbottom has experienced bad first rounds in the past and acknowledges it can be difficult to recover.

“It just snowballs,” he explains.

“You’re under pressure, 300 point gap becomes 350, then 400, and instead of being defensive or smart, you become aggressive and you take more risks. It’s a hard position to be in.”