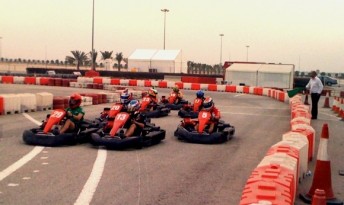 The kart race at Bahrain, predictably, got pretty serious

In what was meant to be a simple time trial with 13 of the V8 Supercars drivers, it turned into a full-on kart meeting, with practice, qualifying, pre-finals and the all-important final. Slade said that taking a trophy home was a nice way to start the weekend.

“I’m stoked to get my first trophy of the year,” he told Speedcafe.com.au.

“I got out in front early and just maintained the gap to Karl. He caught me a bit at the end but I had it under control.

“Everyone had some fun with it, but like all race drivers, it got pretty serious out there. It was good to have some fun with the boys before the real stuff starts tomorrow.”

Reigning V8 Supercars Champion Jamie Whincup failed to make the final, while Shane van Gisbergen’s hopes of a podium were dashed late in the final when the right wheel came off the kart.