Dane: There’s a hell of a long way to go

Dane: There’s a hell of a long way to go 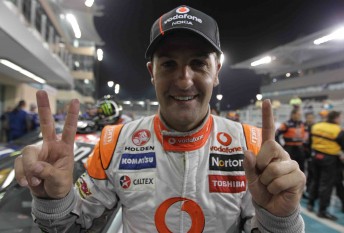 After dominating the first two races of the 2010 V8 Supercars Championship Series, Roland Dane isn’t making room in TeamVodafone’s trophy cabinet for another title just yet.

The champion team owner, who has orchestrated one of the most successful manufacturer switches in the V8 Supercars’ championship history, was pleased with Jamie Whincup’s double Abu Dhabi win last weekend, but told Speedcafe.com.au that there’s a long way to go in this year’s title chase. “We’ve only just started this year, only a fool would think we’re going to win the title at this stage,” Dane said.

“There’s several good teams out there who are going to give us a very strong run for our money. Garth Tander (Toll Holden Racing Team) had a bad weekend, but he’s not going to have a bad one every weekend. We know what we’re up against at this level.”

Dane acknowledges that before the Abu Dhabi season opener, he knew his team had what it takes to win – despite the change from Ford to Holden in the off-season.

“Yes, of course I thought it was possible,” he said.

“It was always our intention, but it’s not so easy to achieve.

“Jamie is operating at a very high level at the moment, and he understands what it takes to get the most out of these cars, and if he has a good car and we engineer it well, he can do the job better than anyone. For me, he’s at the top of his game.”