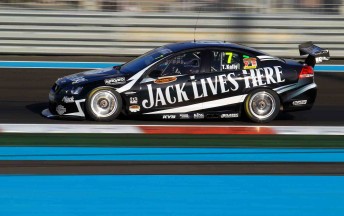 Jack Daniel’s Racing’s Todd Kelly is looking at a fresh start to the 2010 V8 Supercars Championship Series at the Gulf Air Desert 400 in Sakhir, Bahrain this weekend.

While his brother and team-mate Rick Kelly left the Yas Marina Circuit in seventh place in the championship, Todd Kelly was fresh out luck in Abu Dhabi, finishing both races outside the top 20 due to a number of incidents.

Kelly is now focused on putting his woes behind him and concentrate on getting his title bid back on track at Bahrain – a track where he has taken a race win before (in 2006 with the Holden Racing Team).

“I’m looking at it as more of a fresh start,” said Kelly.

“The first round was a disaster and I’ve put that behind me. I’m a lot more confident this weekend, especially with how we have gone here in the past.”

The older of the Kelly brothers is looking forward to tackling the ‘Grand Prix’ circuit that the V8s will use for the first time this weekend.

“This track looks unreal. We had the car working really well last time we were at this place and the bit that they’ve added is a really cool piece of track,” he said.

“It looks like it will be really enjoyable to drive on and I can’t wait to get out there and see what the car will do.”

But Kelly actually has a small head start on his V8 rivals. He drove a Chevrolet Lumina Series car here beck in 2006 before the V8’s first race at the Middle Eastern track.

“I was here in the Chevrolet Lumina Series cars when they first came over here,” he said.

“It wasn’t all that many miles and it was a long time ago, but it was a really enjoyable piece of track and when we did come here to race our cars I was pretty disappointed that we didn’t get to use it.

“I’ve said each year we raced here how much of a shame it is to be leaving all that track up there on the hill and not using it so it’s great to come back here and finally get to drive on it in our Jack Daniel’s Commodores.”