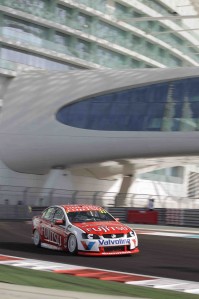 After V8 Supercars’ debut race meeting at the stunning Yas Marina Circuit, team owner Garry Rogers has warned the category not to get carried away with the glitz and glamour of the billion dollar race track.

The wily owner of the Fujitsu Racing team says that most tracks that the V8 Supercars race at are more than adequate for the Championship Series.

“Yes, Yas Marina was great, but there’s nothing wrong with the facilities we have in Australia – like Bathurst or Adelaide,” he told Speedcafe.com.au.

Rogers says that the temporary structures used at circuits like Gold Coast and Homebush can take the shine off permanent facilities like Winton and Hidden Valley.

“Some of facilities are temporary, and because of that they might not seem as ritzy, but they’re certainly as practical,” he said.

“It’s nice to come to Abu Dhabi and Bahrain, but there’s nothing wrong with the others. You’d race over here a lot if you could, but you can’t and we won’t.

“Most of Australia’s circuits are not an issue. The pits are generally big enough. You don’t have air conditioning vents like we had at Yas Marina, and you don’t have a dunny in your back pocket, but if you want to go to the toilet, there’s a tree not too far away!

“We don’t realise how lucky we are some times with permanent facilities we have back home.”