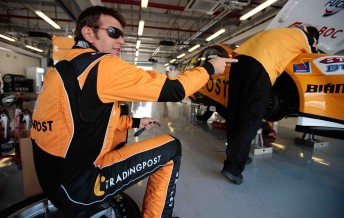 Race suits were the talk of the V8 Supercars pit lane on Saturday at Yas Marina Circuit.

Drivers and crew members from V8 teams Bundaberg Red Racing, Brad Jones Racing and Triple F Racing were all forced to switch into alternate race wear due to a homologation issue with the suits.

It is believed that the suits’ homologation number on the overalls did not feature on the FIA Technical List No 27, a record of all overalls that have been homologated by the FIA as meeting or exceeding the 8856-2000 standard – FIA’s required standard for fireproof racing overalls.

“The situation is pretty simple, unfortunately,” he said.

“We entered into a contract late last year with Jays, trading in Australia as Barry Lee Racewear (Based on the Gold Coast).

“On Friday, I got a phone call from Abu Dhabi that the suits don’t comply with the FIA. Obviously, I had no idea that it was the case. We’re not a race suit manufacturer. We hire a company to do that for us, and our contract with Barry Lee says he has to supply us with FIA-approved race suits.

“Clearly, this has not happened, and it’s very embarrassing, but we’re fixing the problem as quickly as we can.

“Our lawyers are dealing with it at the moment. We’ve paid them a considerable amount of money, and we haven’t got what we paid for.”

Ridden is flying to Bahrain this week to personally deliver new suits that are being put together now for the affected teams.