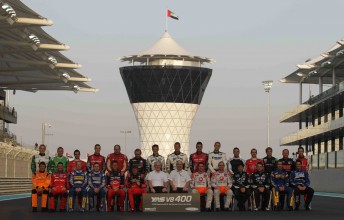 Roland Dane has suggested that the Middle Eastern racing fraternity should have its own V8 Supercars Series.

The owner of Champion V8 team Triple Eight Race Engineering (which runs TeamVodafone) would like to see the circuits in the Middle East hold their own ‘winter’ series to help promote the main V8 Supercars Championship Series, which is locked into coming to the Yas Marina Circuit for the next two years, with options for another three.

“There is an increasing interest in motorsport in this part of the world,” he told Abu Dhabi newspaper The National.

“It makes sense for us to come here in some shape or form during the Australian summer, the winter here, to do a mini-series. It might not be part of our championship, it might be separate – a bit like GP2 Asia and the main European series.

“If there is demand then why not? We would need some local drivers, some Emirati stars, but if we had three, four or five Arab guys then ultimately there would be long-term local interest.”

“We have a five year strategic plan to build a motorsport culture in the UAE,” he said.

“Whoever we need to work with, that’s what we will do. Now that people have seen what we can do in terms of a circuit and a spectacle, they will want to come. We’re going to work with Tony (Cochrane) and the V8 Championship to evolve things because we need to get young Emirati drivers in our different series.”

At this point, five world-class motor racing facilities exist in the Middle East – Bahrain, Yas Marina and Dubai, Turkey and Qatar, with plans to build more in the future.