Diffs and grip make it hard to start

Diffs and grip make it hard to start 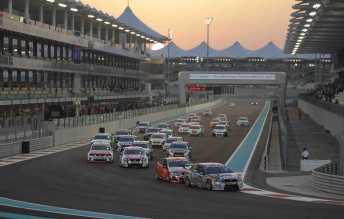 The start of yesterday's first race at Yas Marina Circuit

The Yas Marina Circuit’s high grip levels and V8’s mandated differential ratio made it hard to launch the cars off the line in yesterday’s opening round of the V8 Supercars Championship Series.

The diff ratio (3:2:5) is tallest that the series’ uses, and no less than three cars stalled or almost stalled at the start of Race 1 (including Jason Bright, Michael Caruso and karl Reindler).

Rock Racing’s Jason Bargwanna says that combined with the super grippy track surface and the diff ratio, it’s a case of precision to start the car.

“There is lots of grip, tyre temperatures are up, and last night, the track was quite grippy, and it has obviously caught a lot of people out.

“It caught me out here in pit lane as well (Bargwanna stalled during his pit stop). Trying to get the car moving on pit lane speed limiter is quite difficult as well.”

According to V8 rookie Karl Reinder, the engine on his car simply “died” at the start.

“I might use a bit more throttle in this race, just try and slip the clutch a bit more. I need to drive it off the line – that’s the best thing. I couldn’t possibly get wheel spin out there.”