Brad Jones: We underestimated the task

Brad Jones: We underestimated the task Jason Bright showed pace, but a slow start and an extra fuel stop hurt his chances

V8 Supercars team owner Brad Jones says that he underestimated the extra commitment to field a third car in the V8 Championship Series.

Jones, a V8 team owner since 2000, is running three cars in the main series for the first time this year – adding the Fair Dinkum Racing Commodore of Karl Reindler to his two regular cars of Jason Richards (Team BOC) and Jason Bright (Trading Post Racing). 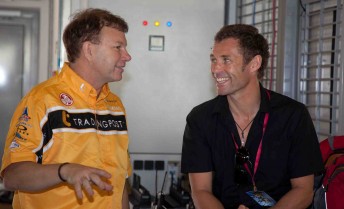 Jones told Speedcafe.com.au the addition of the third car will take some time for the crew to get their head around.

“It’s certainly a lot more hectic going into the races with the extra car,” he said.

“In some cases, it’s double the work load, rather than just a third. And also, running three cars means we have a lot of new people in the team.

“For a first race with three cars, I think we did a pretty good job, but we’re getting used to the pits stops, what people say on the radio. Now that we’ve got one race under our belt, I think we’ll do a better job today.

“We spent some time debriefing afterwards and it’s just a matter of sorting out the protocols on what to say on the radio when we’re finishing up a stop and things like that. The things that you’re a little bit rusty on, simply because we haven’t done it.

“For the #21 crew, a lot of those guys are new, so they’re getting to know each other, and sure, most of them have worked in the game before, but they just need to get to know what the team are capable of doing.

While Jones and his crew deal with the addition of the new car, Jones did have time to meet up with his old Audi mate Tom Kristensen.

The eight-time Le Mans legend was at the Abu Dhabi track, checking out V8 Supercars, as well as visiting members of the Yas Marina Circuit as he is commentating the Formula 1 race at the track later this year.

Could we see Kristensen drive in the endurance races or the Gold Coast SuperCarnivale? The answer is no, according to BJR, who says that a date clash has ruled him out of entering.