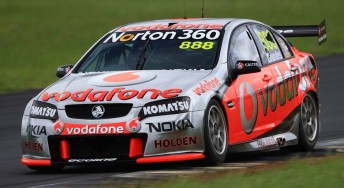 Triple Eight Race Engineering has accused Kelly Racing of spying after a JDR employee was allegedly caught taking a sneak peek of the undercarriage of one of the champion team’s brand-new Holden Commodores.

The Daily Telegraph reports today that a Kelly Racing employee was under Craig Lowndes’s #888 Commodore after the cars were being unloaded from a shipping container earlier this week.

”I think they did it when the cars where outside the garages after they had come out of the containers,” Triple Eight boss Roland Dane told The Daily Telegraph.

”Apparently they were looking underneath the car. It is certainly not good form and something you don’t do.”

”I am going to call the whole team in and really make an example of them,” Kelly said.

”There were actually two young guys who we haven’t taken away before because they are workshop based apprentices. They got a big excited when they saw all the cars stacked up and they went down and had a look. They don’t know the normal protocol but still it is no excuse. They have already had a serious talking to.”

To read the full story in The Daily Telegraph CLICK HERE