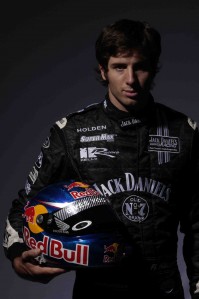 The 27-year-old Jack Daniel’s Racing driver will debut a new helmet colour scheme at the Yas Marina Circuit this weekend – the first time Red Bull has taken full ownership of his helmet design.

Also, Kelly will take in a short two-day trip to Red Bull’s headquarters in Austria between the first two rounds of the V8 Supercars Championship Series in the Middle East.

“It’s a brand I loved and respected for many years, and I was chasing support from them for a while,” he said.

“It’s a pretty exciting time for me. I’ve been with them since 2006, and I won the championship that year, so it’s great that we’ve continued and built on the support to now.

“This year is the first year I have a full Red Bull helmet, which I’m quite excited about it.

“The original design I had on my helmet meant a lot to me – the Ned Kelly theme, and it was something that I’d developed over the years. I put a little bit of feedback in the design that they originally gave me, and it has come back a little bit different to most of the other Red Bull helmets that are out there.

“They are very particular with their brand, and it took them a little while to get the design right, and we’ll probably continue to tweak it over the next few months, but for a first-up attempt, I think it’s pretty good.”

Between the Abu Dhabi and Bahrain V8 Supercar rounds, Kelly will head over to Fuschl am See, Austria – the world headquaretrs for Red Bull.

“I’m going there for three days, Sunday, Monday and Tuesday,” he confirmed.

“On Sunday, Elysia (Rick’s girlfriend) and I are going to look around Austria, and then on Monday and Tuesday, they’ve got a full schedule for us to visit the Hangar, the staff and a couple of the facilities.”

Kelly is keen to return to the Red Bull headquarters in the future to partake in Red Bull’s fitness training camp.