Craig Lowndes steals the ball in the beach soccer match

V8 Supercar drivers have taken an early victory in the Middle East ahead of the opening round of the V8 Supercars Championship Series at the Yas Marina Circuit this weekend.

The ‘V8 Supercaroos’ won the match 2-1 over the UAE team. 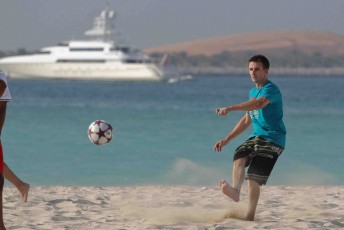 Mark Winterbottom launches a ball to his V8 Supercar team-mates

The match was played in the Corniche Beach area, close to the main part of the Abu Dhabi city.

Besides the soccer match, the V8 Supercars drivers were also involved in other media activities ahead of tomorrow’s first practice session for the opening round of the V8 Supercars Championship Series at the sensational Yas Marina Circuit.