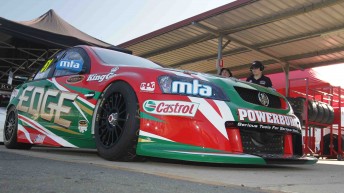 The ‘Dirty Dangerous Dude’ is being rested for this weekend’s opening round of the V8 Supercars Championship Series.

Paul Morris, dubbed the most dangerous driver by his rivals in an Auto Action magazine driver survey in 2007, says that when he competes this weekend at the Yas Marina Circuit, he’s going to peg back his trademark aggression.

The Queensland team owner is replacing Kiwi hero Greg Murphy in the #51 Castrol Commodore VE due to a conflicting engagement that Murphy has with the Top Gear Live show in Auckland, New Zealand.

Morris stressed to Speedcafe.com.au that his mission for the Abu Dhabi weekend is to make sure the Castrol car is straight for Murphy when he arrives in the Middle East for the second round in Bahrain.

“If the car is capable of being in the top 10, then I’ll give it a shot, but the main goal is to get through the weekend,” he said.

“If we unload the thing and it’s fast, I’ll have a go, but I’m going to be a fair bit cautious. I won’t be going about it in my usual style.

“There’s no pressure on me there. The main goal is to make sure the car is in one piece for Murph when he comes over for Bahrain.

“I’ve got plenty of excuses if I don’t do any OK! I think I’ll be fine. As far as racing goes, I’ve been in a race car every week for the past 20 weeks, so it’s not really that much of a deal.”

During the V8’s offseason, Morris has kept busy racing Sprintcars, and also won the Bathurst 12 Hour production car race last weekend with Garry Holt and John Bowe in a BMW 335i.

In the Middle East, Morris and Murphy will drive the old PMM-built Commodore VE that Russell Ingall raced last year. Ingall (Supercheap Auto Racing) will drive the brand-new Triple Eight-built Holden Commodore, while Murphy will get his new car at the Clipsal 500 (Adelaide) – the first Australian V8 round for 2010.

“Murph’s new car is about two weeks ahead of schedule. It was painted last week and a few of the boys are staying behind and piecing it together,” Morris said.

“There’s a fair bit different between our old cars and the new cars. When you sit them beside each other, they are a lot different in many ways. Just about every part of the car is different – from the steering wheel right down to the wheel bearings. It’s amazing how different they are really.”

Morris says that it’s hard to predict who is going to be racing up the front of the V8 field this year – but thinks that reigning Champion Jamie Whincup is a guaranteed front-runner.

“I don’t really know. It’s too hard to say at this stage,” he said.

“On paper, (Jamie) Whincup is just that much better than everybody else. It might take Triple Eight some time to adapt to his new car, so we’ll see how that goes. I suspect that they’ll get on top of it pretty quick.

“Everyone else out there, it seems, is just making up the numbers, so we’ll see how well some of the teams have done their preparations in the offseason.”