The cars and stars of the V8 Supercars Championship Series are currently in the air, bound for the Middle East for the first two rounds of its series.

Two purpose-built 747-400 aircraft are carrying more than 110-tonnes of cars and equipment to Abu Dhabi track. The cars left on Sunday night, and the majority of the drivers and team left last night.

The Queensland teams were snapped by keen-eyed photographer Jeremy Small at Brisbane International Airport on Sunday.

Here are some of the stats and facts on the V8 circus traveling to the Middle East; 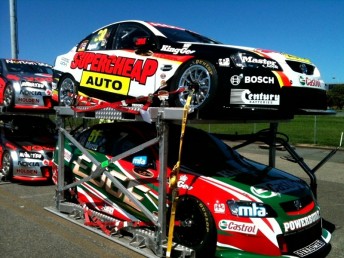 Spares in the container include:

An estimated 500 people from Australia will be attending the races in Abu Dhabi and Bahrain, including:
• Drivers
• team personnel
• officials
• TV crew
• media
• sponsors