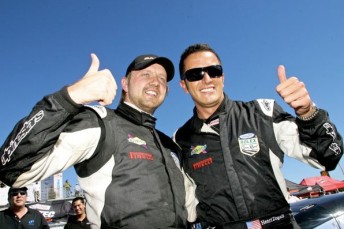 Henri Zogaib, right, has been arrested on serious fraud charges that relate to a Ponzi scheme which caught out former team-mate Ryan Dalziel, left

Allegations point to Zogaib basically funding his own motorsport career from dodgy investments and false promises.

Autoweek reports that this year’s Daytona 24 Hour winner Ryan Dalziel, a former team-mate of Zogaib, has lost his house over the Ponzi scheme.

“I only hope he gets what he deserves,” Dalziel told Autoweek.

What’s a Ponzi scheme you ask? Well the most recent instance was arguably the biggest fraud in corporate history, when Bernard Madoff carried out a scheme so massive that he was imprisoned for 150 years. A quick definition of a Ponzi Scheme can be seen on Wikipedia HERE